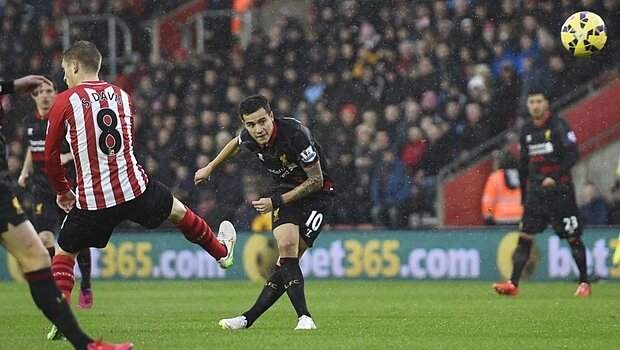 What a season we are witnessing! Here are the 10 best goals of the season so far.

Honourable mentions must go to:

People may debate as to whether this was a shot or a cross, but judged by the pace on the ball and the accuracy of the shot I am giving the Brazilian the benefit of the doubt with this stunning free kick! This brilliant video filmed from the crowd shows just how good this strike was.

This video shows Matic clearly loves playing at Goodison as he netted for a second time in consecutive season. Not known for his goalscoring, he looks up and simply smashes the ball into the corner of the net.

This goal is in as much for the occasion as the finish. 19 year old Anthony Martial had recently joined Man Utd for a whopping £36 million, as a relatively unproven player it raised many eyebrows that United would spend this amount on him. It only took him a matter of minutes to become an instant hero with a goal against their bitter local rivals.

The first of two Bournemouth entries. A fantastic game saw Bournemouth draw 3-3 with Everton in November, this was the pick of the goals from right back Adam Smith.

Coming in the dying embers of a rather drab match, Phillipe Coutinho stepped up to the plate by rifling in this stunning strike to give Liverpool a crucial away win at the Brittania, easing some of the pressure on then manager Brendan Rodgers.

A brilliant piece of individual skill here, saw Jermaine Lens chip the keeper superbly as it hit the roof of the net via the bar.

A quite magnificent strike. If Ronaldo scores a goal like this you would never hear the end of it. The ball drops to Ritchie on the edge of the box who controls it perfectly before unleashing a superb volley into the top corner. Have some of that!

This may only be a consolation, but its one of the best you will ever see. Sit back and enjoy this stunning scissor kick from the big Belgian.

The Gunners were seemingly cruising against Manchester City before Yaya Toure pulled this out of the bag. How he generates the power and accuracy with his side foot at full speed using his weaker foot is a question no-one would be able to answer. When you leave a keeper like Petr Cech flat footed from that far out you know its a special strike.

There is no question about this one. The amount of curl and power Martina generates here is phenomenal. The way the ball moves from left to right is Roberto Carlosesque. Even though it is only January I can’t imagine there will be a better goal then this one, but you never know in this unpredictable season!